We spent the bank holiday weekend in Kent having a really lovely time seeing family and friends. Silly weather though - on the Sunday we got totally drenched while trying to have a picnic in a park, and managed to spend the whole of the following day sitting on a beach in glorious sunshine.
As usual, my mum couldn't resist spoiling Torin (and me) and bought us a new duvet cover for Torin's bed. I mentioned here that I hadn't found a duvet cover that I liked and that was reasonably priced, but we managed to find this one in BHS of all places. 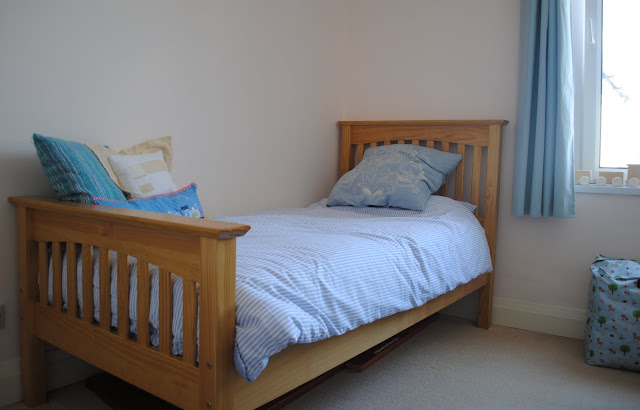 I really like the classic look of the pale blue ticking, and he won't outgrow it for a while either. He still absolutely loves his bed - it makes getting him to sleep a lot easier! Since he's been sleeping in it, he has fallen out a couple of times, so I decided it would be a good idea to get a bed guard, as I don't want him to get into the habit of waking in the night again!
I decided on this painted white one by Baby Dan, as it is easily usable with a slatted bed base (I found that a lot were only really suitable for divans). 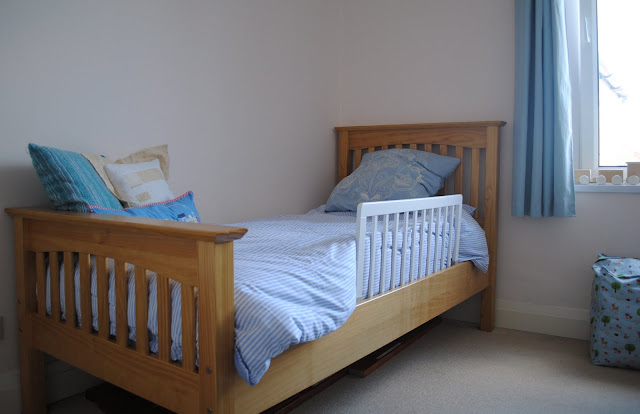 I like the fact that I can remove it easily during the day and then slot it back into place once Torin is asleep.
You may have noticed that I've moved his bed around - it used to be along the window wall. I moved it because after I'd dismantled his cot (which you can just see under his bed), his room had a spare alcove, so I moved his wardrobe into it. The bed then looked better around this way, and it's a bonus that he's now no longer sleeping against an outside wall.
What do you think? Any sources for lovely bedding that's not too childish?
Posted by beautiful square feet at 20:13