As the children's bedrooms still aren't sorted out (Astrid is still in with us and Torin is still in his current room), I've found that more and more of Astrid's toys are making it into our living room. Therefore, I've needed to put them in something separate, as the storage I use for Torin's toys is full to the brim! As we don't have room for a trusty Expedit or anything similar that could go against a wall, I find that we're always losing floor space to toy storage, and this is no good thing as we are limited in this area anyway! How to create more storage then, without losing more space - the answer was to put it underneath an existing piece of furniture.

I found this lovely striped laundry bin in Matalan the other day and it fits perfectly underneath the console table in the living room: 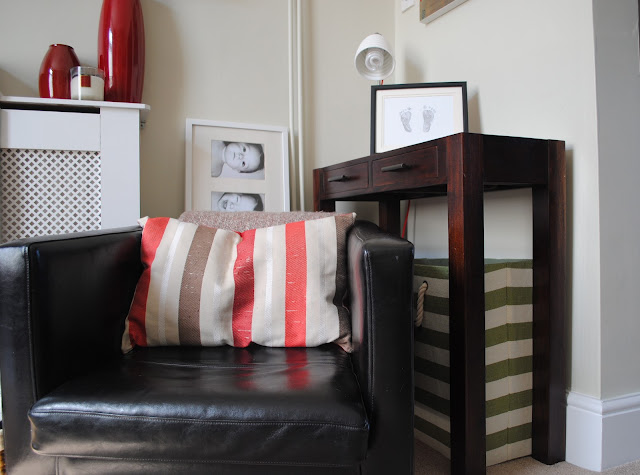 It'll be a while before Astrid can get toys out of anywhere by herself, so the fact that this is underneath a table won't be a problem. Neat, don't you think?

Have you noticed what David's done to his lamp?(!) He's put in a daylight bulb! I hate it as it sticks out of the end of the shade and looks awful! I suppose I'll have to live with it though, as I did buy it for him so he could have a task light for painting his miniatures and he needs the brighter light. Grr though!
Posted by beautiful square feet at 22:23