My, it has been a long time since I've been around here hasn't it! Thank you to all of you who have continued to stop by (it's lovely to see my page views top 10000!) even though I haven't given you anything new to read for ages! We've had a lot going on at chez Mellor recently - a mixture of good and bad really, but things are now settling down and so hopefully I'll be able to find my way back to posting regularly again.

Just to keep you in the loop, some happy things that have happened since I posted last are:


It's Astrid eating solids that has lead to this post actually as I bought a very exciting (!) purchase today - a jug with a lid. I don't know about where you are, but here in the UK, the advice is that children under one should drink cooled boiled water in case the water passes through lead pipes. I'm pretty certain I stopped boiling water for Torin way before his first birthday, but I'm still trying to be good for Astrid. This is fine, but it's a real hassle trying to remember to boil the water in time for it to cool down in time for her to drink it with her meals. So, I decided it would be a good idea to get a jug with a lid that I can fill with boiling water in the morning and then give her water from it throughout the day.

Thinking about jugs with lids reminds me of a vivid image from my childhood - one of my parents' friends used to make squash in this tupperware jug and pour it for us straight from the fridge. This was a really novel idea to me as for some reason, we never did it at home. I love the fact that these jugs are now "vintage"! Actually, maybe that just means I'm getting old! 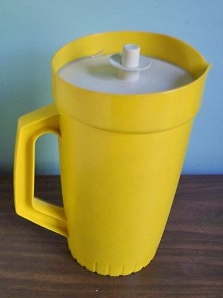 I ended up just getting this cheap purple plastic thing from The Range today. It's not particularly solid, in fact I'm surprised it survived Torin dropping it countless times as he trotted along in front of me as we searched through the shop! It'll do though. The black Soleil tag is actually a removable label.

I've had a little look and I think these are some of the best jugs around at the moment:

I really like the mid-century shape of this green jug from Bodum. It also comes in five other colours.

This sleek design by Georg Jensen is super cool!

I also really like the French simplicity of this fridge jug from The Orchard:

Honestly, one of these days I'll stop buying the first cheap thing I see in favour of one that I actually like and will keep forever!

Which jug do you prefer? Do you have your own favourite that you use for pouring cold summer drinks?
Posted by beautiful square feet at 23:26

Yay, you're back! Hello! Glad to hear you've been well. I love the yellow jug because I love yellow. I'd love a more sophisticated life but hey, young children and crockery don't mix so well. Embarassingly I'm using an old cocktail maker glass jug that I got with a bottle of Pimms years ago. All along the side it tells you what measures to use for different cocktails. It sounds quite nice but actually it's pretty ugly!

Thanks for your welcome back! There's nothing embarassing about Pimms, don't worry! Plus, waste not want not! Hope you and your lot are well!