The back room. A work in progress.

Yesterday I tried to do a bit more work on our back room. I reached a bit of an impasse when sorting through the remaining "stuff" in there as I managed to fill two recycling bags with paper and then found myself staring at what was left, not knowing what to do with it all. Thinking about what else I could do in there, and a little frustrated that I couldn't get more wallpaper to peel off just by picking at it, I decided to tackle this cupboard: 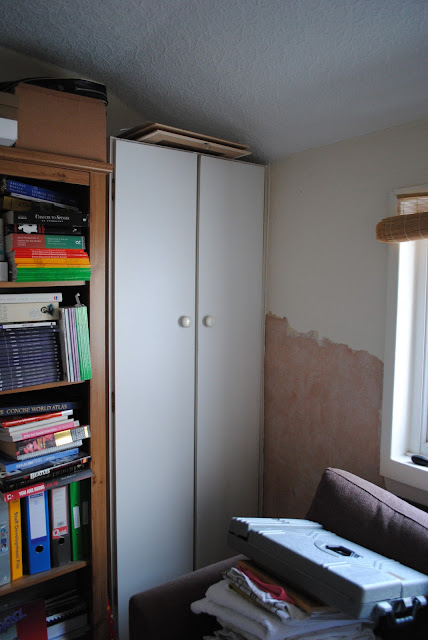 When Torin moves in here, I want the head of his bed to be where the cupboard currently sits, so the plan is to remove the cupboard to give maximum floor space for the bed.

I soon cracked open the tool box, found the screwdrivers that I would need and merrily began removing screws from the doorframes. I had to stop about 15 minutes later as I just didn't have the physical strength to remove some of the final screws - the screw heads were really worn down and look like they've been driven in with a hammer, and I couldn't find our electric screwdriver. I think David will have to help me with this one, and therefore it'll have to wait until the weekend.

Anyway, when I had done as much as I could, the cupboard looked like this: 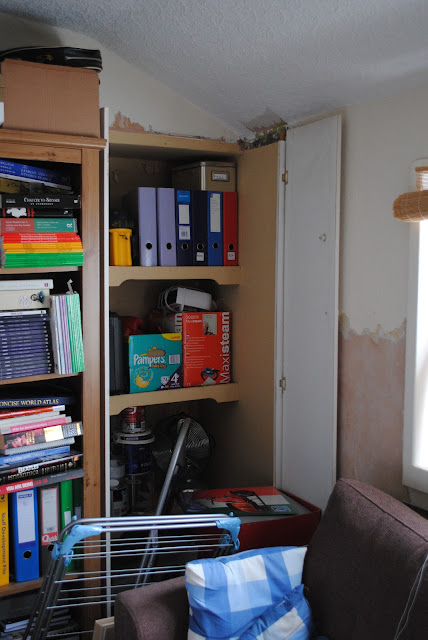 As you can see, one of the doors is still attached, and I couldn't get the left hand side of the cupboard out without moving the bookcase next to it, which was just one job too much for me yesterday.

The shelves that you can see inside the cupboard are built into the alcove and they are flush with the chimney breast behind the bookcase. I'm going to leave the shelves where they are and then build a small cupboard in the bottom of the space using the bottom shelf as the top of the cupboard. When it's finished, we'll be left with a wall with two recessed shelves and a cupboard at the bottom which should look quite neat. The head of Torin's bed will then go in front of the cupboard, so it will essentially be hidden storage.