New tiles in the hallway!

Gosh! A lot has been going on in our little house in the past week. I know I said last week that I would post a picture of our newly tiled hallway (and then didn't), well here it is! 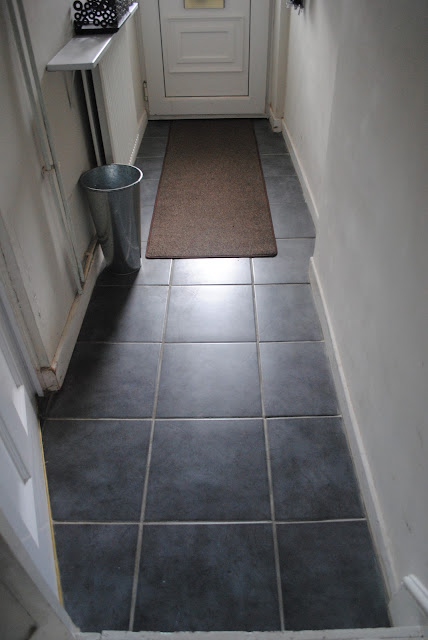 What do you think? I love the fact that I can stand in the living room, look into the kitchen and the hall and see the same tiles - it makes the whole ground floor flow so much better as the tiles are the same in the bathroom too. We are going to redecorate this space - you can probably see how scuffed the walls are, and that the woodwork needs a lick of paint, but that's definitely a job for next year. You can see my plans by taking a peek at my to-do lists.

David said yesterday that with the new bannisters and tiles, our house is beginning to feel like a proper space, and it really is!

My mum's been a star - she came up on Thursday, stayed until Saturday and worked tirelessly painting the woodwork in our living room and landing. She's done such a great job. I felt so useless just sitting chatting to her and watching her work. She wouldn't let me do anything though, and I guess to tell the truth, the paint fumes did start getting to me after a while. It all looks great though - thanks so much mum!

We did even more over the weekend - we chose and bought a carpet for our stairs and landing. I had initially chosen a natural look carpet that was meant to look like sisal but was actually made from polypropelene, but when I told the salesman that I wanted it for our stairs and landing, he shook his head and said he wouldn't sell it to me as it was completely unsuitable. I pointed out that it said on the back of the sample that it was suitable for stairs, but he again shook his head and said that it was really dangerous. Apparently, if you spill a tiny bit of water onto that type of carpet, it becomes an ice-rink! He apologised for spoiling my day, but I assured him that he hadn't and I was glad that he had pointed out the danger. He also lost money as we ended up choosing a cheaper carpet, so I have no doubt that what he told me was out of genuine concern.

In the end we chose a 100% wool carpet that is called Stone Rib. I can't find a picture of it anywhere online, so you're going to have to wait until it's fitted (hopefully on Saturday) before you see it. It's probably better that way anyway I guess. I can't wait to have it fitted, it's going to make our whole house feel warmer, and at last will stop the stairs from creaking so much!
Posted by beautiful square feet at 19:11

Email ThisBlogThis!Share to TwitterShare to FacebookShare to Pinterest
Labels: Hallway