A light with Michelin-like curves

I hinted here that I had got David a birthday present that I was very excited about. I gave you some clues - mentioned that it was from The Conran Shop though it didn't bear their label; said it was cream, chrome and red, and that it had won quite a few design awards this year. As his birthday has now passed, I can share with you what the gift was . . .

It got him the Hector Bibendum lamp Terence Conran has designed for Original BTC. If you haven't heard of it already, you can read about its design history here. Basically, Original BTC commissioned Terence Conran to design a new version of the Hector lamp in order to celebrate the 21st anniversary of their partnership. The new lamp also celebrates the centenary of Michelin House, London (hence the white curves reminiscent of the Michelin man) which Terence Conran restored in 1985. Here is the little beauty sitting on the console table in our living room: 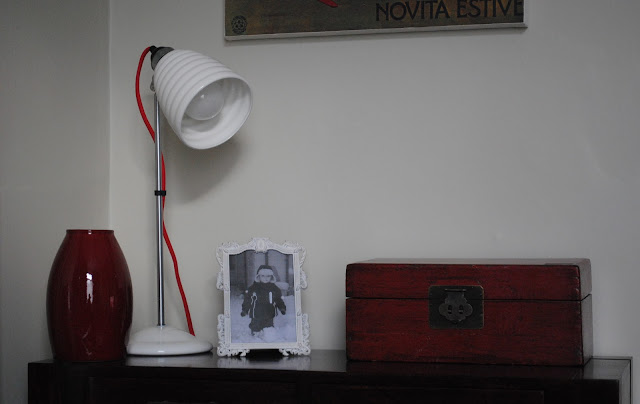 I also said that I really hoped David would like it as much as I did, and luckily he did! He likes classic and good design and this lamp will hopefully have a space in our home for a very long time! It's such a well-made piece - it feels very substantial in your hand, and the red cable is a fun twist on the classic design of the Hector lamp. What do you think? Do you like it?

A little part of me felt a bit bad that I was also benefitting from buying this lamp for him (in the sense that I now have a lovely designer lamp in my living room), but I guess it can't be helped as I do live here too! David does have an input into what goes into our house and I always run decorating ideas by him before I do anything, but I guess I'm really the one with the interest in interiors. The first time I saw a picture of this lamp, I thought it was really cool, but there was no way I would have bought it for him unless I thought that he would love it for himself. He gets to use a lamp that he really loves in order to paint his Warhammer miniatures and I get to sit on our sofa and appreciate the lamp from across the room too! Do you ever have this issue? Would you consider buying something for your partner that was going to sit in your home even if you absolutely hated it, just because they loved it?

I other news, the tiler who came to give us a quote for changing the tiles in our hallway came back this week and did the work - we're really pleased with the way they look. They've totally transformed the hallway - I'll post some pictures as soon as I've had a chance (or maybe after David's had a chance) to give them a really good clean.
Posted by beautiful square feet at 22:04

Beautiful, looks like it was made for that spot! You're so lucky that you both have similar tastes; we disagree on everything!