A little piece of Velcovsky in my bathroom.

So you know the old story - grandmother dies, and the old picture she had hanging over her dingy gas fire turns out to be an original Monet. Well something, admittedly not quite so dramatic as that, has happened in my house recently!

I've been making my way through Veronika's archives over at A Few Things From My Life (which I highly recommend by the way), and I learned from this post, that I've been using a piece of classic Czech design to house our toothbrushes! 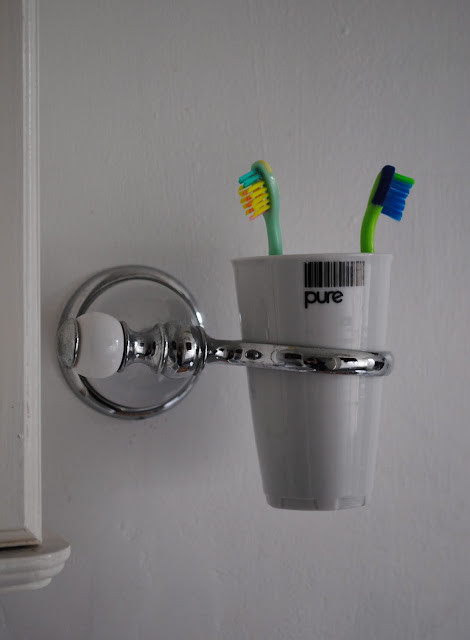 This quirky porcelain cup was given to us several years ago by my uncle and his Czech wife (who live near Prague). At the time, I thought it was quite cool - the attention to detail is pretty impressive - it really is a good replica of a polystyrene cup. However, not realising its true status, it sat on our desk, occasionally containing the odd biro. When Torin accidentally broke the white ceramic cup that should sit in the chrome holder above (I think he knocked it out while swinging his toothbrush around his head (!)), I realised that porcelain cup sitting on our desk would be a great replacement.

Thanks to Veronika's post, I learned that the "Pure cup" as it's known, was designed by renowned Czech designer Maxim Velcovsky, who is known for his porcelain work, and also for redesigning the interiors of public buildings.

I have to admit that before I read Veronika's post, the barcode was turned around to face the wall so the cup was white against the pale walls of our bathroom. Now I know where it has come from, the barcode faces forward as it should, and funnily, suddenly I don't mind it so much!
Posted by beautiful square feet at 22:11

Ha! Love it, shame it wasn't actually a Monet though!