New lighting in the living room?

I've had a poorly boy here with me today - Torin's a bit under the weather and spent a large amount of the day lying down on our sofa in the space next to where I usually feed Astrid. Sitting there today I was gazing around my living room and dining room with my usual frustration of not having the time to be able to blitz the place as much as I want to and my eyes settled (as they often do) on the ceiling lights. 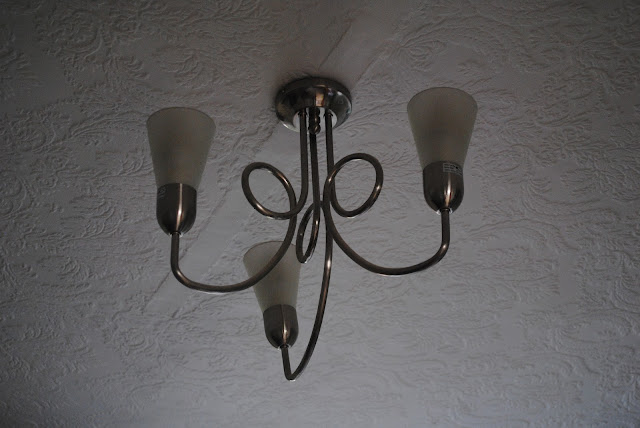 Wasn't it nice of the previous owners to remove the strip lighting that was obviously in this room before he replaced it with this fixture! Not so nice of him however to not bother to fix the mess in the wallpaper that the removal of the strip lighting clearly made!

We have the same lights in the living room and the dining room, and whereas I don't mind it really, I don't think it really goes with the room very well and I don't think I would have chosen something like it myself. Like a lot of things in this house though (like the kitchen cabinets and the bathroom suite), they're too inoffensive to replace; although I think they sit too near to the ceiling - our rooms could take something lower as the ceilings are high. Also, I thought it would be a real hassle to remove them as I thought there would be a maze of wires in that thing. I have it good authority however, that the lights would be quite easy to replace. That got me thinking . . .

I think something like the KNAPPA from IKEA would do the trick nicely - what do you think?

Posted by beautiful square feet at 21:48