I remember when I first heard the phrase "losing one's marbles" - it was when I was in year 4 at primary school and I had my marbles stolen from inside my desk. Back then the school had lovely old wooden desks with lift-up lids and ink wells that had been very well used through the years. I remember I went home and told my parents that I'd lost my marbles - despite themselves, hilarity ensued, followed by an explanation of why what I had said was funny!

I remember I used to be pretty good at the game back in the day, and after most of my collection was stolen, I quite quickly managed to win a lot more. While I was staying with my parents last week, my mum gave me my stash as they'd been sorting out their attic and found it up there amongst my old school books. 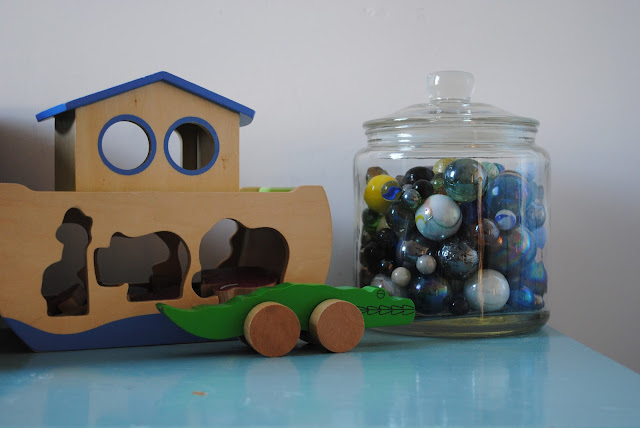 It's amazing how nostalgic I became while I was looking through the box - trying to remember what all the different kinds were called - I just about remembered that one size was called a "donkey" but couldn't remember much else. I found my favourite ones though - the large pearly one that you can see at the bottom of the jar, and another smaller pearly one that was a lilac colour.

I don't even know if children still play marbles like we used to. I doubt it somehow - if conkers have been banned in loads of schools, I would have thought that a game that encourages children to hit spheres of glass with other spheres of glass risking shards splaying everywhere including potentially into their eyes, ears, hair etc. would have been a gonna a long time ago.

Did you used to play marbles - what did your favourites look like?
Posted by beautiful square feet at 21:47

I remember the largest marbels being called 'Tombolas' and thats about it!