The life story of an aloe vera plant.

I bought my aloe vera plant from IKEA several years ago - I think we may have even had it in our previous house - I think that is definitely a record time for me to keep a plant alive! I don't know if you've seen the size of the plants in IKEA, but they're certainly much smaller than my now giant plant that lives in my bathroom!
It had been sitting in this pretty pot on the window in our bathroom, but it was really getting too big to sit there comfortably, so I needed to find a new space for it. 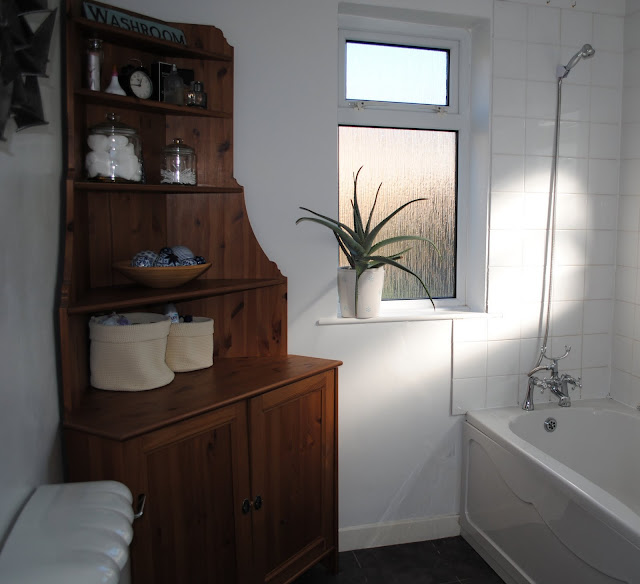 This was actually one of the reasons I decided to dismantle the old LEKSVIK IKEA corner cabinet we had in there - I knew the plant wouldn't fit on any of the shelves. Also, because the cabinet was so tall and against an outside wall, the back of it had gone a little mouldy. All in all, it was a good excuse to get rid of this cabinet, as I hadn't ever really liked it. We bought it because we were looking for a reasonably priced corner cabinet to house our TV in our old house, and this fitted the bill. However, I quickly went off it as it seemed to be trying too hard to look old, while being so obviously new and cheap.
Anyway, back to the aloe . . . it really needed re-planting, as you can see here (yes, that really is yet another paint sample on a wall in our house!): 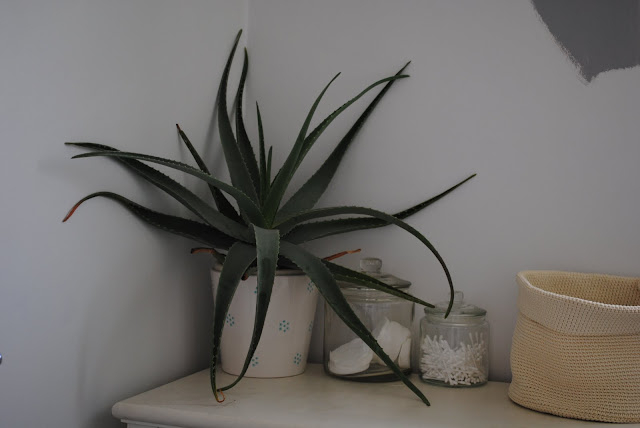 As the sun shone here in Cardiff yesterday, I decided to make the most of the lovely weather, took Torin outside and re-planted the aloe vera. A Spanish friend of mine once said that an aloe vera should be re-potted when the pot it sits in becomes less than half the length of the plant's longest frond. I've always followed this advice and my plant seems to be thriving. I also only water it about twice a year (seriously!) - I think it really likes the humidity of the bathroom.
A few minutes later, after using compost and a pot we already had, the plant was sitting in its new home: 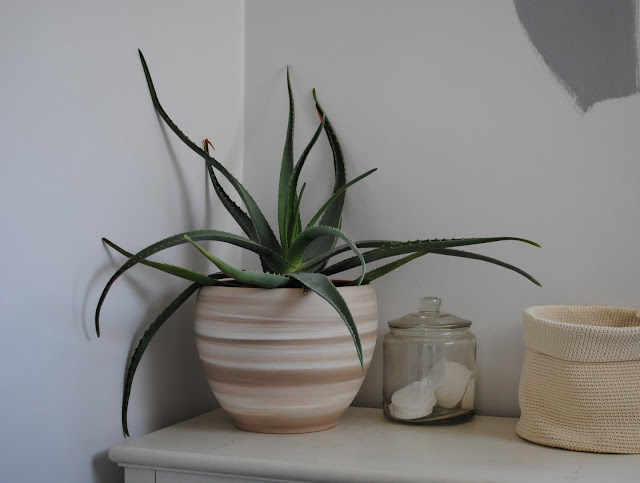 The white cabinet that is now in our bathroom used to be in an alcove in our living room, had the TV on it, and housed computer games and remote controls. It now contains toiletries and helps to make the bathroom feel bigger by being smaller and a paler colour than its predecessor.

NB. You may notice that there is a glass jar missing from the last picture . . . I guess it was only a matter of time before it got broken. Torin picked it up by the lid and of course, the jar fell off and smashed on the floor. I just didn't get to him in time, but I guess it wasn't really a smart place to keep it with a 2 year old around. Luckily, I managed to scoop him up before he trod on any of the glass - it was bathtime so he didn't have anything on his feet! Lesson learned - I'll be finding a new place to keep the remaining jar, and eventually it'll be kept in the wall mounted cabinet I still need to find and buy!
Posted by beautiful square feet at 13:11