Clumsiness in the bedroom.

I can't believe a whole month has gone by since my last post. It seems that tiredness, having two children and a slightly more than mild addiction to Fringe has meant that I really haven't found much time to write. I really will try to find more time from now on!

Our bedside table lamp broke yesterday - bits just fell off the mechanism that holds the light bulb in place. Lucky it only cost a few pounds from IKEA quite a few years ago (actually, thinking about it, perhaps that's why it broke)! I've no idea how it got like that, although I suppose it's probably been knocked over at some point. Being just inside our bedroom door and at toddler head height, it is in a somewhat vulnerable position! I can't really blame Torin though - I have to confess that there have been several times when I've had my hair wrapped in a towel and knocked it over while bending down to plug in my hairdryer. I also have to confess that this is how the bottom two butterflies in this arrangement, met their doom (they used to hang above the bedside table. Clumsy me.

We had a spare table lamp just sitting around - it used to be in our living room in our old house and it just hasn't found a natural place in any of the rooms in this house. I rather liked the height of the lampshade we were using in our bedroom, so I put the existing lampshade onto the base of the spare lamp and this is how it looks. 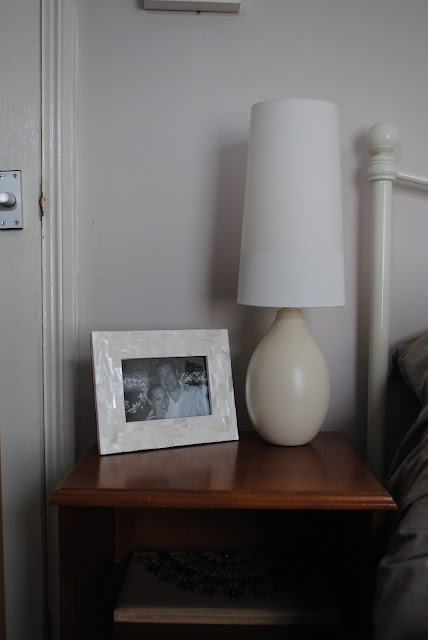 I think I actually prefer the new look - I like the mid-century shape.

I really will try to get back here before the week is out!
Posted by beautiful square feet at 20:27

Email ThisBlogThis!Share to TwitterShare to FacebookShare to Pinterest
Labels: Bedroom