The new blind for Torin's room arrived a couple of days ago and I put it up straight away - remember I mentioned he was having to make do with a blanket tied on to the window with hair ties?!

I'd ordered a blackout, spring-loaded roller blind from Keeleys Blinds. I'd never used them before, but they were a lot more reasonable than other places and as you'll know by now, we're on a very tight budget!

Anyway, the blind was delivered when they said it was going to be delivered, is very well made and was easy to install. I was also impressed with the company because I ordered the blind on my iPad and then, when I went on our desktop to write about what I'd done, there was a banner (that hadn't appeared on my iPad) on their website giving a further 11% off if you entered a code. I contacted them straightaway telling them that I'd just ordered a blind, had only just seen the offer and could they please please please give me the discount . . . and it was refunded to me the next day! 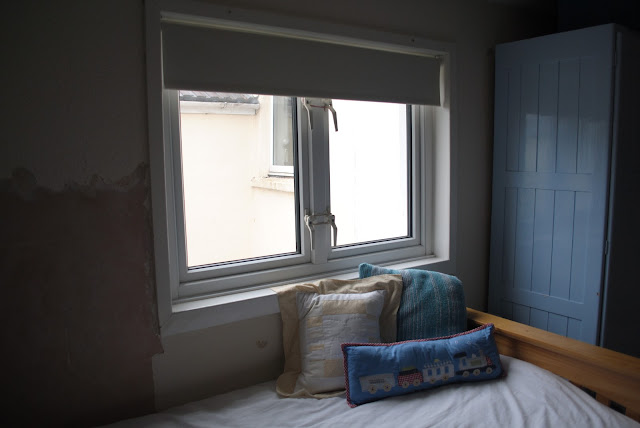 As you can see, there is a huge amount of work still to do in this room (I got a bit trigger happy pulling off a tiny bit of wallpaper to see the state of the wall underneath!), but it was so important that Torin moved in here, as Astrid really needed to go into her own room - it seemed like even the turning of a page in a book was waking her up!

The light was so dingy here today as it bucketed down for most of the afternoon - so apologies for the rather drab picture. I realise that you also can't see the colour of the blind - it looks really dark, but it's actually a lovely fresh ivory. I think the blackout feature is going to work really well too - I certainly fell asleep well enough in there earlier while I was settling Torin into bed! Can you see also why I chose a sprung blind rather than a cord-operated one? Torin would have been able to reach the cord wherever we fixed it - I just felt it wasn't worth the potential danger, so although I've seen cheaper blackout cord-operated roller blinds around, I'm really pleased with my choice and feel that Torin is pretty safe in his room on his own.

Actually that leads me to the next "feature" - can you see the rather attractive (temporary!) "locks" I've put on the windows? Yep, they're elastic bands wound around the handles until I manage to find some suitable window locks - those windows open fully! Scary? I know! Anyway, they seem secure enough for now, and there's no way Torin can take the elastic bands off by himself.

Have any of you had the same issues? What solution did you come up with?
Posted by beautiful square feet at 21:46

Think I might use Keeley's blinds for some blackout blinds in my bedroom! Good price and I always like recommendations!

Hiya! I was quite impressed with them and they were very reasonable. Only slight thing was that they didn't send any instructions with the blind so had to read them from their website, but that was fine really. Make sure you buy them on a day when they're doing the 11% discount!